If you have sent a bitcoin payment in the last couple of weeks, you may have noticed that your transactions are taking much longer than expected to confirm.

We have received your emails.

Since, like the Bitcoin network, we are currently working through a backlog, we want to thank you for your patience. With the high volume of questions we're getting about delayed payments, we decided it would be best to write a short explanation about what's happening with many bitcoin transactions right now.

How Bitcoin Transactions Get Confirmed (or Delayed)

Transactions on the Bitcoin network itself aren't controlled or confirmed by BitPay, but by the bitcoin miners which group transactions into "blocks" and add those blocks to the Bitcoin "blockchain" – the shared historical record of all transactions. When a transaction has been added to a block six blocks ago, it's considered a done deal.

Currently, bitcoin network traffic is unusually high due to increasing demand for transactions per block. Block sizes are limited, so this means that transactions which exceed the capacity for a block get stuck in a queue for confirmation by bitcoin miners. This queue of unconfirmed transactions is called the bitcoin mempool.

For context on what's happening now, here is a look at the current bitcoin mempool size.

The good news? A lot of people are interested in using bitcoin for transactions. The bad news is that this network traffic may produce delays of a few hours to a few days for some users and a wait time of weeks for a small number of users.

What To Do If You Have an Unconfirmed Transaction

If your bitcoin transaction to a BitPay merchant has not confirmed yet, you will need to wait for it to be confirmed by bitcoin miners. Since BitPay does not control confirmation times, there is unfortunately nothing we can do to speed up the process once your transaction has already been broadcast to the network. 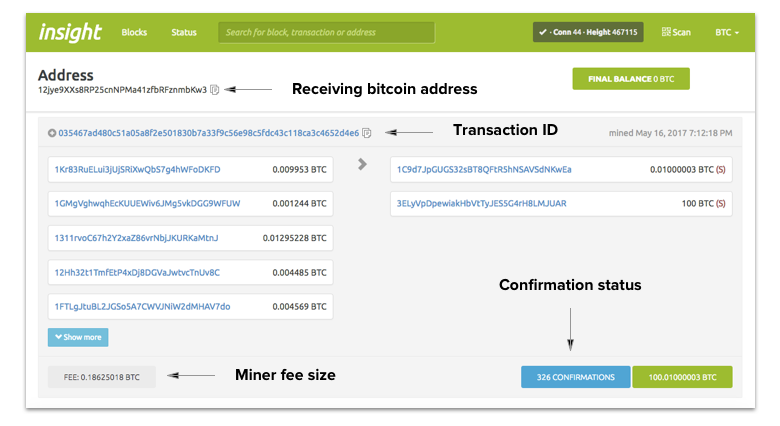 Note that until your payment has six confirmations on the bitcoin blockchain, the recipient will not have access to the funds and will not be able to refund your transaction.

How To Avoid Delayed Transactions

Because block sizes are limited, it's important for bitcoin miners to know which transactions they should include in blocks first. Miners use prices to figure this out. When you broadcast a transaction, your total amount sent usually includes a "miner fee" which goes to pay miners.

If you want your transaction to leave the bitcoin mempool and be added to a block quickly, it's important that you include a sufficient miner fee. This is why we strongly suggest using the BitPay wallet or another true bitcoin wallet that can dynamically calculate the miner fee needed for timely block confirmations. For reference, the website bitcoinfees.21.co gives the minimum miner fee as 360 satoshis/byte, though this amount has been fluctuating throughout this week.

Transactions are being added to the bitcoin mempool's full queue constantly. Some may have been sent with higher miner fees than the one sent with your payment. This means that with current network traffic, miners may deprioritize your unconfirmed transaction even if it was sent with an appropriate fee at the time.

If you are not using the BitPay wallet, you should contact your wallet provider for help if your unconfirmed funds do not show up as spendable again after a few days.

What Is BitPay Doing About This?

While BitPay does not control confirmation times on the Bitcoin network, we care about the payment frustrations BitPay merchants and purchasers are experiencing right now.

For purchasers, our BitPay wallet team has been working on updates to the BitPay wallet for our next release which will help to mitigate the effects of these delays on the bitcoin network when they occur.

For bitcoin users and businesses alike, we're also continuing to explore options for faster, simpler, and more affordable bitcoin payments. We'll continue to post here on the BitPay blog as we make progress.

If this article didn't answer your question, check out our payment guide or our new video walkthrough for more info on how to make a successful bitcoin payment.

Today we're sharing part one of a series giving young people an inside look at what it's like to intern with us at BitPay. Will Hay joined our user experience engineering team back

Here at BitPay we are always working to make bitcoin payments more user-friendly and widely known. That’s why we were happy to hear the news coming from our neighbor to the north.