UPDATE: Microsoft has ended its support for further releases of Windows Phone. BitPay is no longer releasing new app updates for Windows Phone 8.1. The BitPay and Copay wallets will continue to be updated for Windows devices. 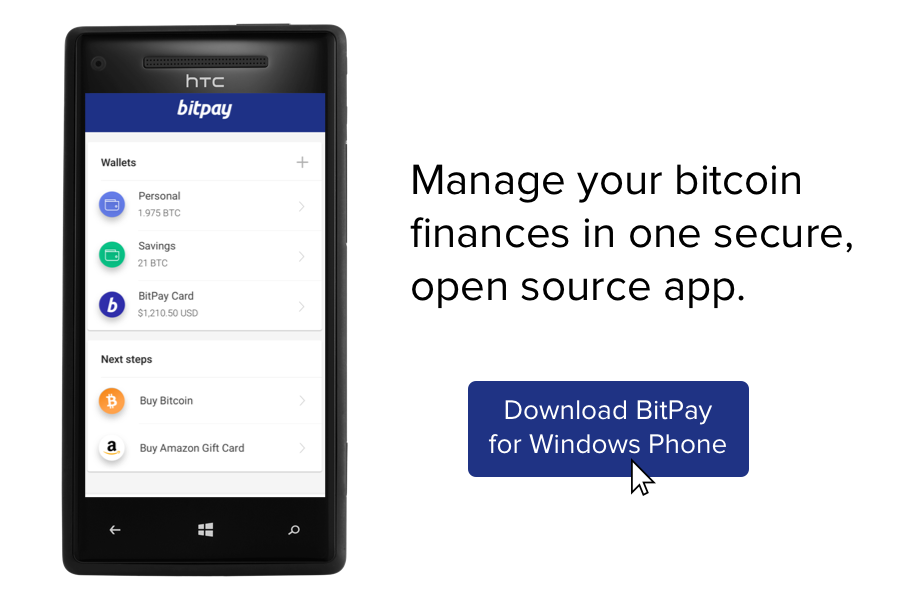 Bringing the BitPay wallet to the Windows Phone is only a small part of our work affecting Microsoft users in recent years. In late 2015, Microsoft added our Bitcore Bitcoin development platform to its Azure cloud service platform. Back in 2014, Microsoft became the most prominent company accepting bitcoin payments, using BitPay for Xbox payments and other purchases its online Windows Store. Microsoft's continued commitment to blockchain technology and interest in smart contracts makes our bitcoin wallet platform – the foundation of many exciting smart contract projects – a powerful addition to the Windows Phone app ecosystem.

Microsoft's Ashok Misra recently moderated one of our public discussions on the state of bitcoin payments at the Merchant Payments Ecosystem conference. Here's what he had to say about bitcoin:

"[I]t is clear that we have entered an inflection point with cryptocurrency where we can expect much more stability and a huge growth in market capitalization."

We're excited to continue to develop for the Windows Phone platform. Have a Windows Phone and want to join in on Bitcoin's growth? Click below to download the app.

Want to know what it's like to work at BitPay? There's no better way to dip your toes into the Bitcoin world than to take on an internship with one of our growing

We recently began a blog series showing what it’s like to be an intern at BitPay. For today's part two, we talked with marketing and growth team intern Charles Pustejovsky about some